Oh my girl Seunghee and T-ara Hyomin enthusiastic fans with an adorable interaction on Instagram!

That evening, Hyomin showed love for both junior groups on Instagram. Hyomin wrote clips of herself watching her appearances on television: “Best Christmas present ever during a holiday season when I had nothing special to do. As always, Santa never lets me down. I love you Santa and SBS Gayo Daejeon. MMTG. ”

Hyomin also playfully pointed out that Seunghee burst into laughter at the end of their performance. After adding a few heart emojis, Hyomin wrote “ITZY”, “Oh my girl”, “so pretty”, “but why is Seunghee laughing”, “hehehehehe” in the tags.

Shortly afterwards, Seunghee answered her question with an adorable comment on the post. Seunghee wrote: “Sunbae [a respectful term of address for a senior colleague]… Really … really, really … thank you and I love you … really … I went on stage and thought, let’s not smile no matter what. Let’s take it seriously not to show any emotion. Let’s act like dolls. Since we heard that T-ara did too [during your original performances]. But at some point in the second half of the performance I started to think … do we seem like humans? This thought popped up in my head and then I started to think, of course I am human …? After having that thought, I immediately burst out laughing … yes, it’s all due to my inadequate concentration … sigh … I’m sorry … I still have a long way to go. ”

Hyomin then responded to her comment by lovingly writing, “You did a good job. It was good that you laughed. I looked back and wondered if it was me, who never had the chance to laugh [while performing ‘Sexy Love’]I am actually human … I hope I become more human Sunbae. Hoobae [junior], I love you … ” 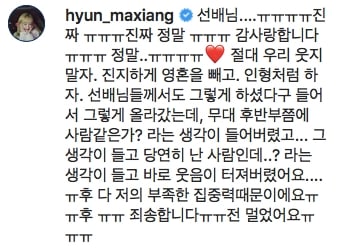 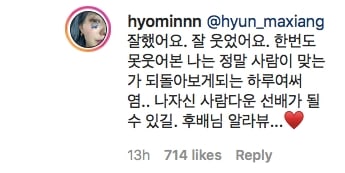 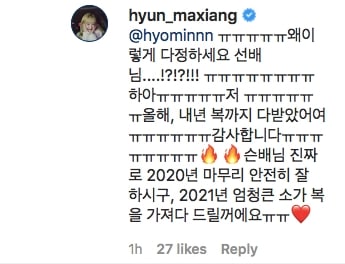 Check out the clips from the covers of T-ara from Oh My Girl and ITZY below! (Seunghee is filmed laughing at 1:38 in the first video.)