“The Sea of Silence”: Bae Doona and Lee Joon talk on the radio about this new series Bae doona was on Lee Joon’s radio program, talking about his new series “The Sea of Silence.

Bae Doona said she was hoping to get on Lee Joon’s radio show and expressed her gratitude for having her with him. When Bae Doona saw Lee Joon in his role as a radio DJ that day, he said, “He’s doing a great job, he looks cool. He’s cool on set too, but in some ways he’s got a little more professional vibe now. “She added that he felt like a younger brother on set.

When asked about her most memorable role, Bae Doona said, “There are so many. I made my debut in 1999 in The Ring. I’ve played a lot of characters since then, so it is difficult to decide which one I love more or think of more, but I like characters that were my first experiences. I played a Korean exchange student who is really bad at singing in the movie “Linda Linda Linda”. I like the movie too ‘As a. ‘”

Bae Doona talked about how she loves learning new things for roles. She said, “After playing roles that required me to learn something, I became addicted. If I am told that I have to learn something, then I want to do it more. Éric Lartigau, the director of ‘#IAmHere’, is a friend of mine. He said I could learn French so I immediately said I would.”

She shared that she was enjoying new experiences like Spanish, French, table tennis and archery. “If you want to make money and learn something without your parents’ support, you have to pay a tuition fee. But I think I got addicted to learning things without having to spend money, ”she said.

“When I went traveling with my French friends, they had to speak English because of me,” she said.“ I felt bad about it and accepted the offer to learn French. To be honest, I couldn’t speak French because I was filming Kingdom at the same time and just memorizing the lines. Fortunately, I’m not in the movie much. ”

Lee Joon gave some insight into Bae Doona and said that he is often touched by her big heart on the set. “She gave the staff chairs with her name on them and even personally peeled fruit. I’ve never seen someone like that at work, ”he said. “She also has to film emotional scenes and she’s an actress to be on the sidelines, but it’s amazing how she takes care of everyone. Personally, I find it hard to just take care of myself. ”

Bae Doona replied, “Of course there are times when I am like that, but the staff gives me a lot of comfort. I like the staff at The Silent Sea so much that I even miss them when I’m with them. ”

Lee Joon announced that he had eaten two bunches of the Shine Muscat grapes that Bae Doona had caused to set. Bae Doona said, “When I eat something and it’s delicious, I bring it to the set. I wanted us all to enjoy things like shine muscats and persimmons together. Glad Lee Joon ate two grapes. ” 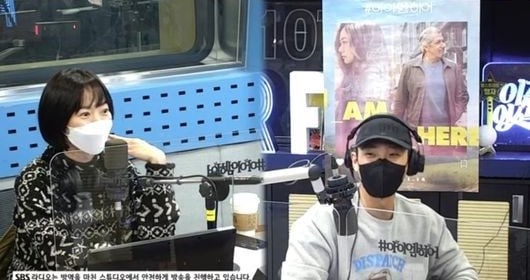 Lee Joon also said of the cast of the film, “Our teamwork is so great,” said that everyone in Jeoksong City is listening to the radio show.

Another highlight of the show was the news the couple received from Gong Yoo. “Chief Han, who lives in Jeoksong City, Paju, has sent about 29 messages,” said Lee Joon, referring to Gong Yoo as his character, team leader Han Yoon Jae.

Bae Doona asked him: “Do you drink alone?” Gong Yoo referred to her by her character name when he replied, “Dr. Song Ji Ahn! Stop talking about the food. You finally noticed me. To think that you two have noticed Leader Han by now, ”Lee Joon and Bae Doona laughed.

Gong Yoo kept sending messages like: “Where does Dr. Song Ji Ahn’s knitted sweater? It’s pretty. “While saying he doesn’t drink alone, he later said he did drink beer and said, ‘I can’t look away because I’m worried about Dr. Make a song that airs live. “Bae Doona told him to watch how much he was drinking and reminded him that he had to call at 7am the next day.

Bae Doona also spoke about her love for wine, sharing that she has over 100 bottles at home and enjoys spending time healing while drinking a glass or two a day. Gong Yoo wrote in the message: “For me it’s white wine” and made other listeners laugh. When she announced that she would like to travel this year, Gong Yoo said he felt the same way.

The actress also expressed her affection for Lee Joon, saying, “My first impression of Lee Joon was that he was so cute. But now he’s really cool. He’s so professional and cool; he’s not messing around at all.”

Watch Bae Doona in the drama “Marriage chaos” Below!

BLACKPINK works with the United Nations to fight climate change